IN ORDER TO NOT MAKE ANY MORE WRONG NAMES FOR YOUR SHOES, HERE ARE THE MOST WIDESPREAD SHAPES YOU SHOULD KNOW

A Derby is characterized by its lacing system.

The quarters are sewn on the vamp and therefore leave the guards free as "ears".

This allows a larger opening of the footwear, well suited to feet with a strong kick. 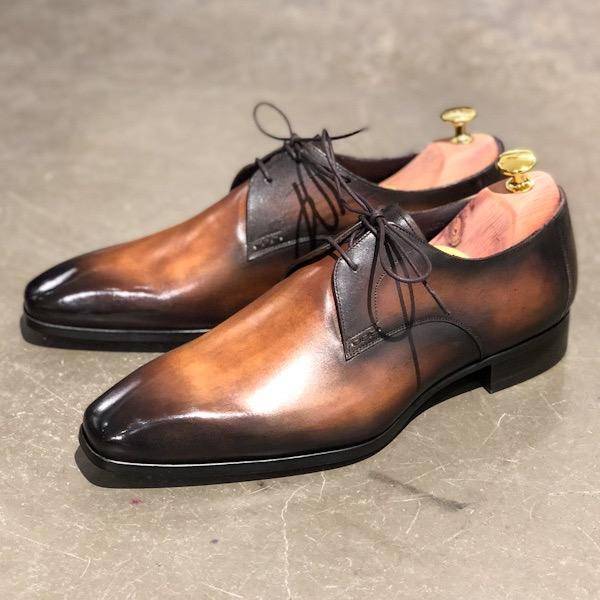 THE IT11 MODEL IS AN EXAMPLE OF DERBY

> MODEL AROUND THE DERBY 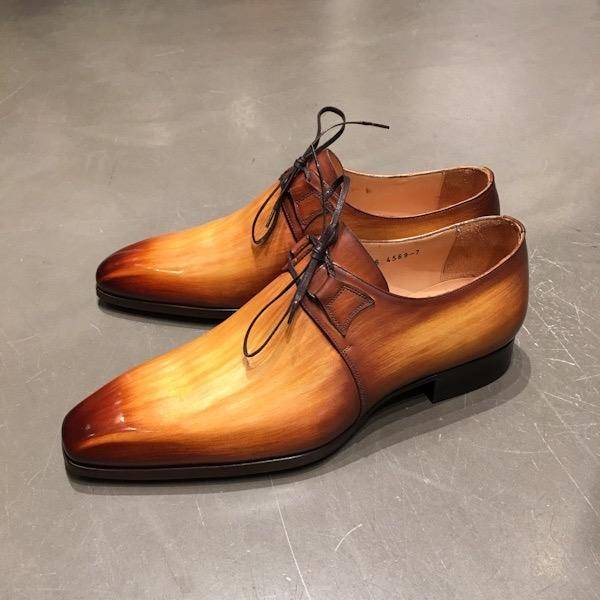 MODEL IT06 IS AN EXAMPLE OF DERBY GUILLIES

This model of lacing "under tubes" is called "Guillies".

To recognize a Oxford at first glance, just look at its lacing.

On this shoe, the guarantors are not free and are sewn under the vamp.

The lacing is said to be closed giving a V-shaped opening which sometimes poses a problem for putting on this shoe in the event of a too strong instep.

The Richelieu is undoubtedly one of the most elegant shoe models because it has few visible seams. 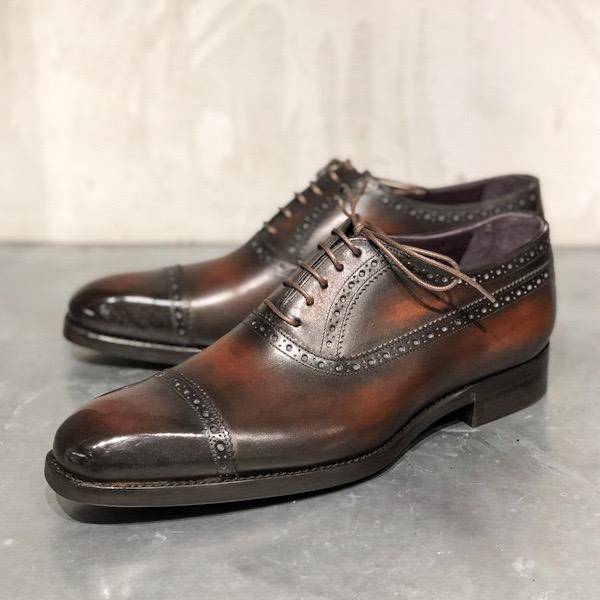 MODEL FR02 IS AN EXAMPLE OF RICHELIEU

> MODELS AROUND THE RICHELIEU 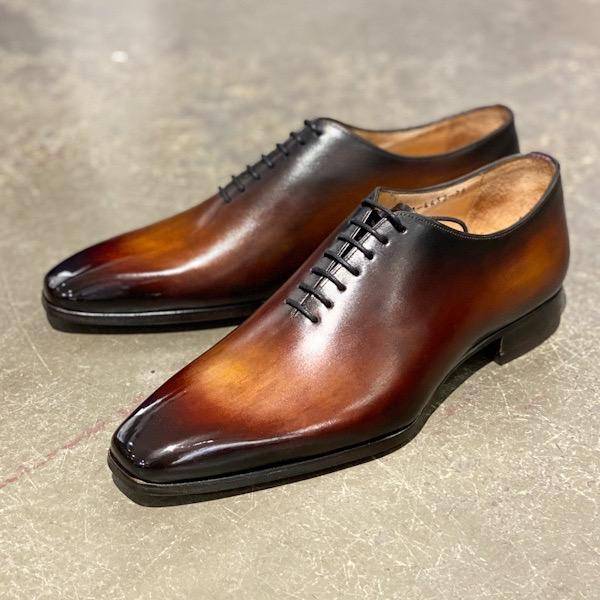 MODEL IT01 IS AN EXAMPLE OF "One cut" RICHELIEU

This Richelieu variant has no visible seams.

This shoe of rare elegance also allows the most free patinas because the work of the artist is not hampered by any demarcation.

A One-Cut Oxford is made with a single piece of leather and therefore requires a skill that is very difficult for a Bootmaker to acquire. 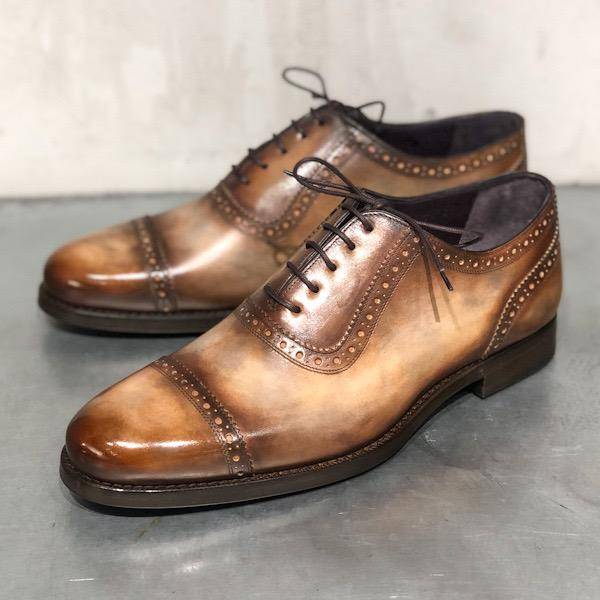 MODEL EN01 IS AN EXAMPLE OF A RICHELIEU WITH A CHEST

This Richelieu model is without guarantors: the eyelets are arranged on a separate piece of leather called the breastplate.

This breastplate is then sewn onto the upper. 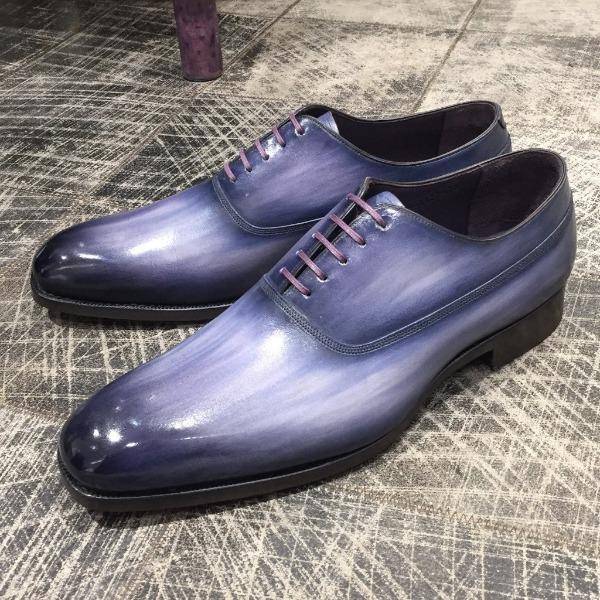 THE FR05 MODEL IS AN EXAMPLE OF A BALMORAL RICHELIEU 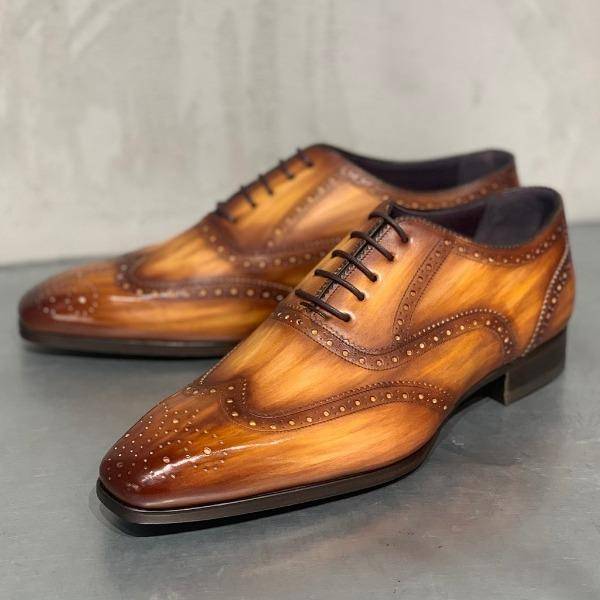 THE IT10 MODEL IS AN EXAMPLE OF A GOLF TIP RICHELIEU

This variant also has a piece of leather added to the end of the shoe, but this time it draws a "W".

This model is also called "Brogue" 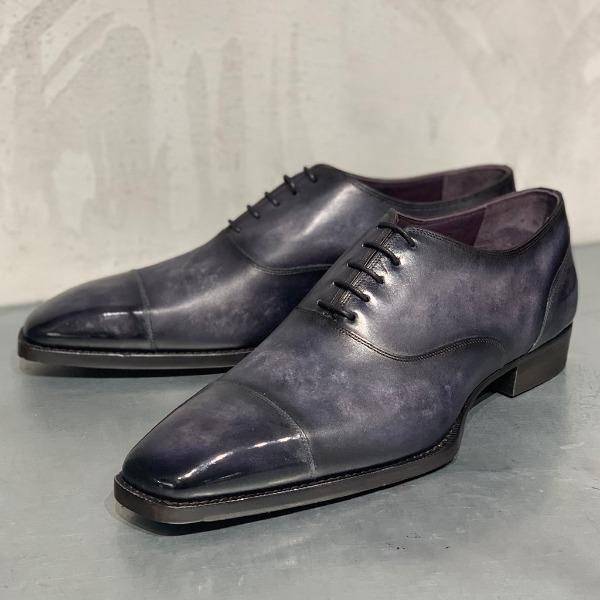 MODEL CR02 IS AN EXAMPLE OF A STRAIGHT TOE BROCHURE

On this variant, a piece of leather is added to the front to form the "straight end".

This stretch can also be simulated by stitching the leather.

These shoes do not have a lacing system.

In their construction, models with buckles (single, double or even triple) are identical to a derby except that the laces have been replaced by straps which close with buckles.

Considered less elegant than a Oxford – because of the metal buckles – they are currently making a big comeback with shoe lovers because they offer a happy medium between formal and relaxed. 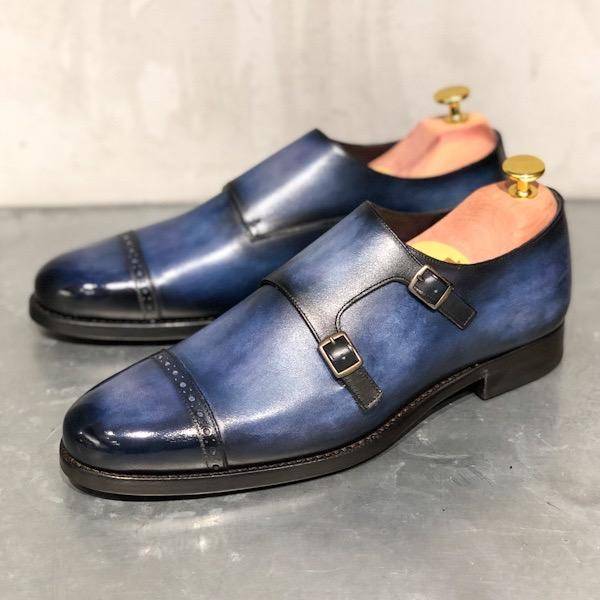 MODEL EN04 IS AN EXAMPLE OF DOUBLE LOOPS 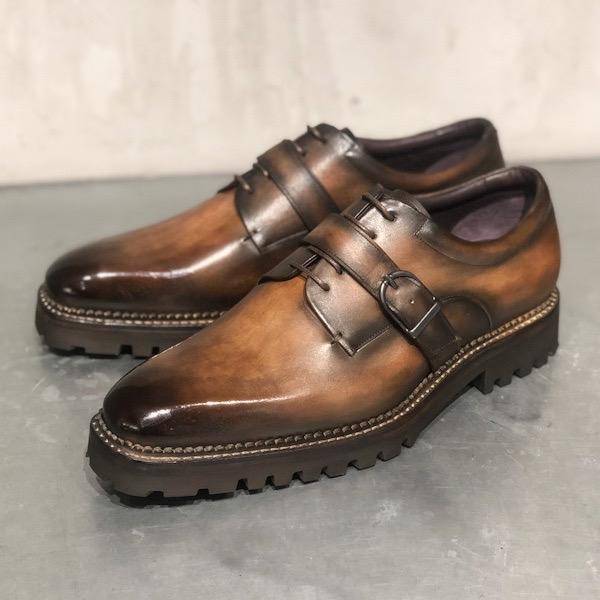 MODEL FX02 IS AN EXAMPLE OF A SINGLE LOOP

On this variant, a simple buckle has been added for a touch of modern elegance. 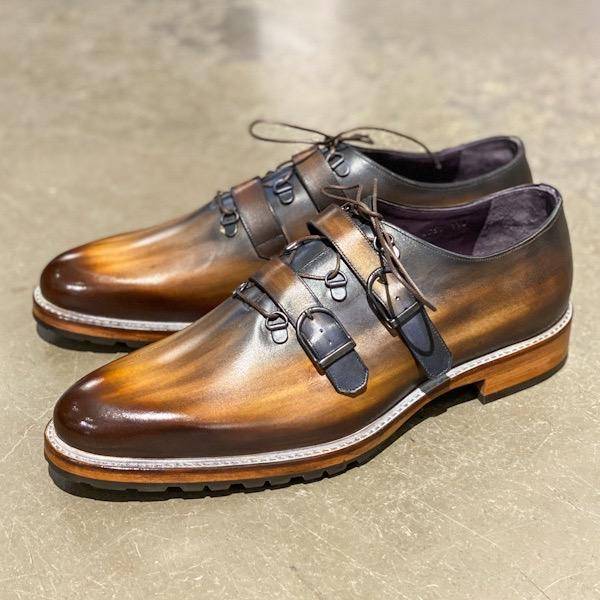 MODEL EX02 IS AN EXAMPLE OF Double-loop Cross

On this variant with a Cross sole, the double buckles reinforce the solidity of the whole.

4 - THE MOCASSIN (LOAFER IN ENGLISH

Everyone agrees that moccasins are probably the oldest shoes in the world, most often associated with American Indians.

We often associate moccasins with relaxation and this is quite normal since originally it was this idea that guided the way it was designed:

As a general rule, moccasins do not have laces which makes it easier to put on.

Moccasins can have their own decorations that are not seen on other models: 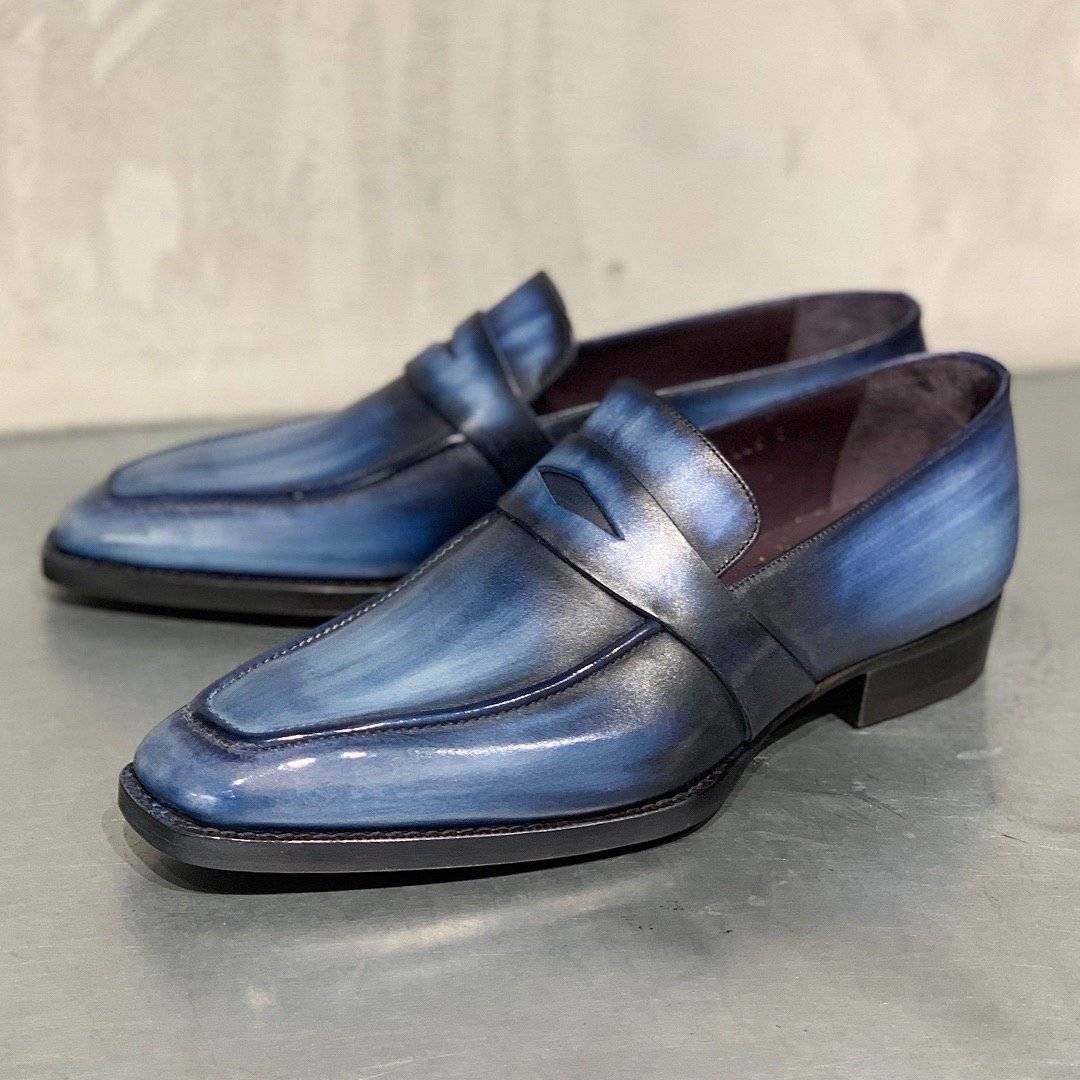 MODEL CR04 IS AN EXAMPLE OF A "Penny loafer" MOCCASIN

Note: the term moccasin also designates an assembly (way of linking the sole and the top of the shoe) in the same way as Blake, Goodyear, Norwegian, etc.

> MODELS AROUND THE "MOCCASIN" 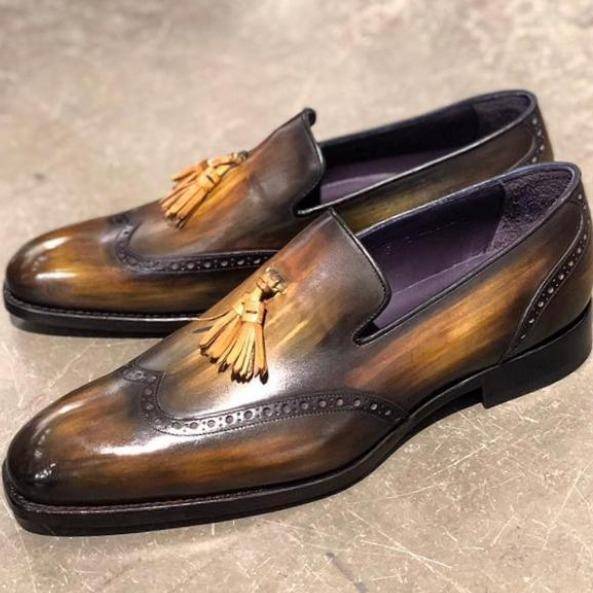 MODEL FR07 IS AN EXAMPLE OF A MOCCASIN WITH POMPONS

Example of Moccasin "with pompoms"

The pompoms can be given a different color patina and reflect your personality.

These days, moccasins are no longer exclusively casual shoes and can be made with stronger construction and quality leathers in order to have a much longer lifespan. 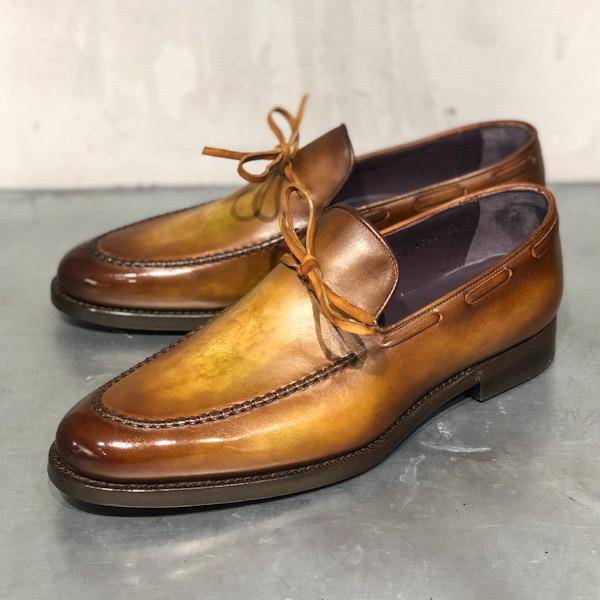 MODEL EN07 IS AN EXAMPLE OF A LACE-UP MOCCASIN

This model is also called "boat"

it is a shoe halfway between moccasins and slippers.

This form of shoe is making a comeback for its elegance and sleek design.

Often made in One cut varnish or not... 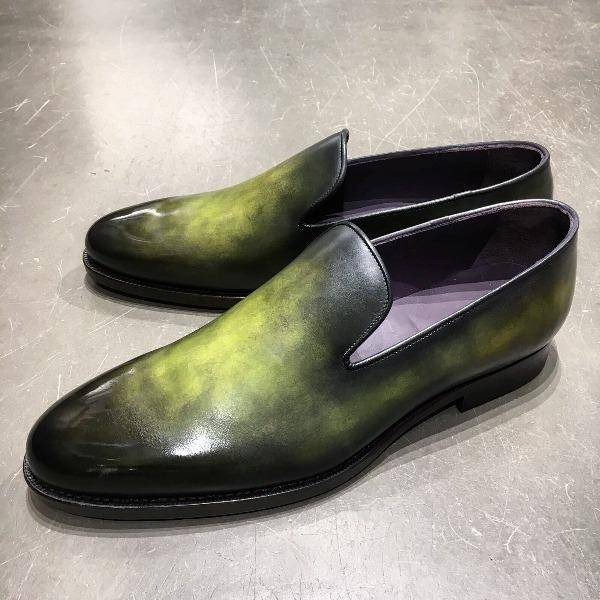 MODEL EN08 IS AN EXAMPLE OF SLIPPERS

Here we illustrate the different categories of high-top shoes...

Due to its particularity of having elastics on the sides, these boots are very easy to put on and take off. 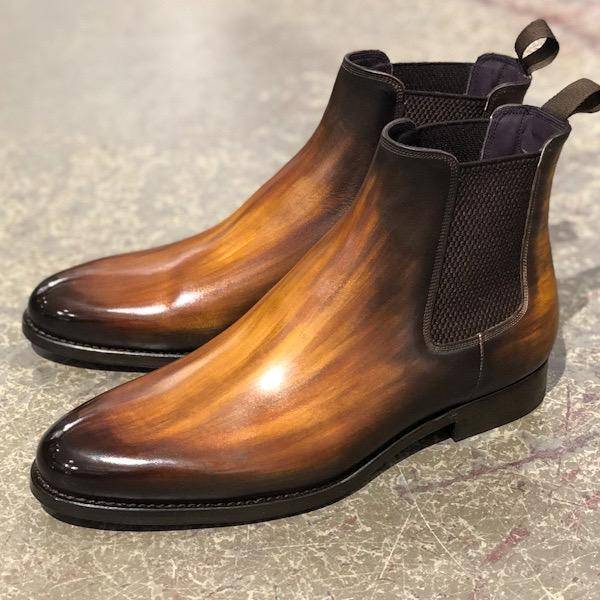 MODEL EN10 IS AN EXAMPLE OF CHELSEA BOOTS 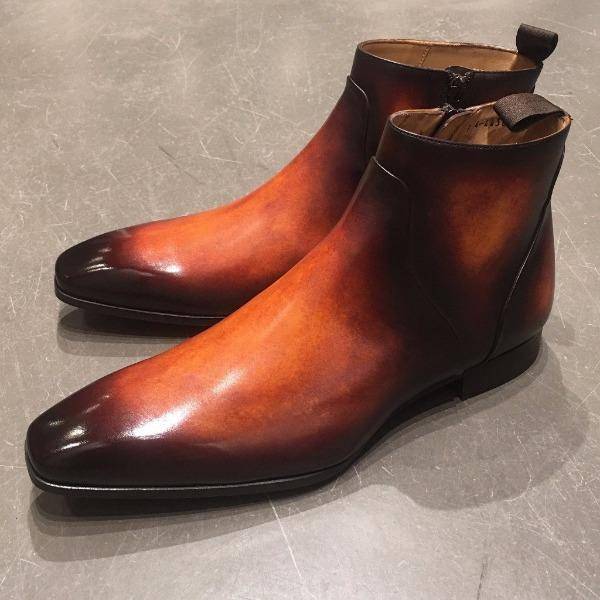 MODEL IT04 IS AN EXAMPLE OF A ZIPPERED ANKLE BOOT 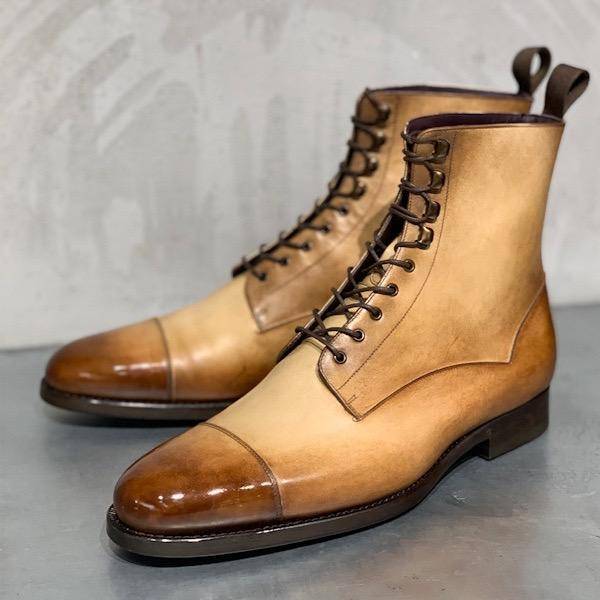 MODEL EN06 IS AN EXAMPLE OF A BALMORAL ANKLE BOOT

On this variant, a piece of leather goes around the entire shoe.

This model is a Balmoral lace-up ankle boot. 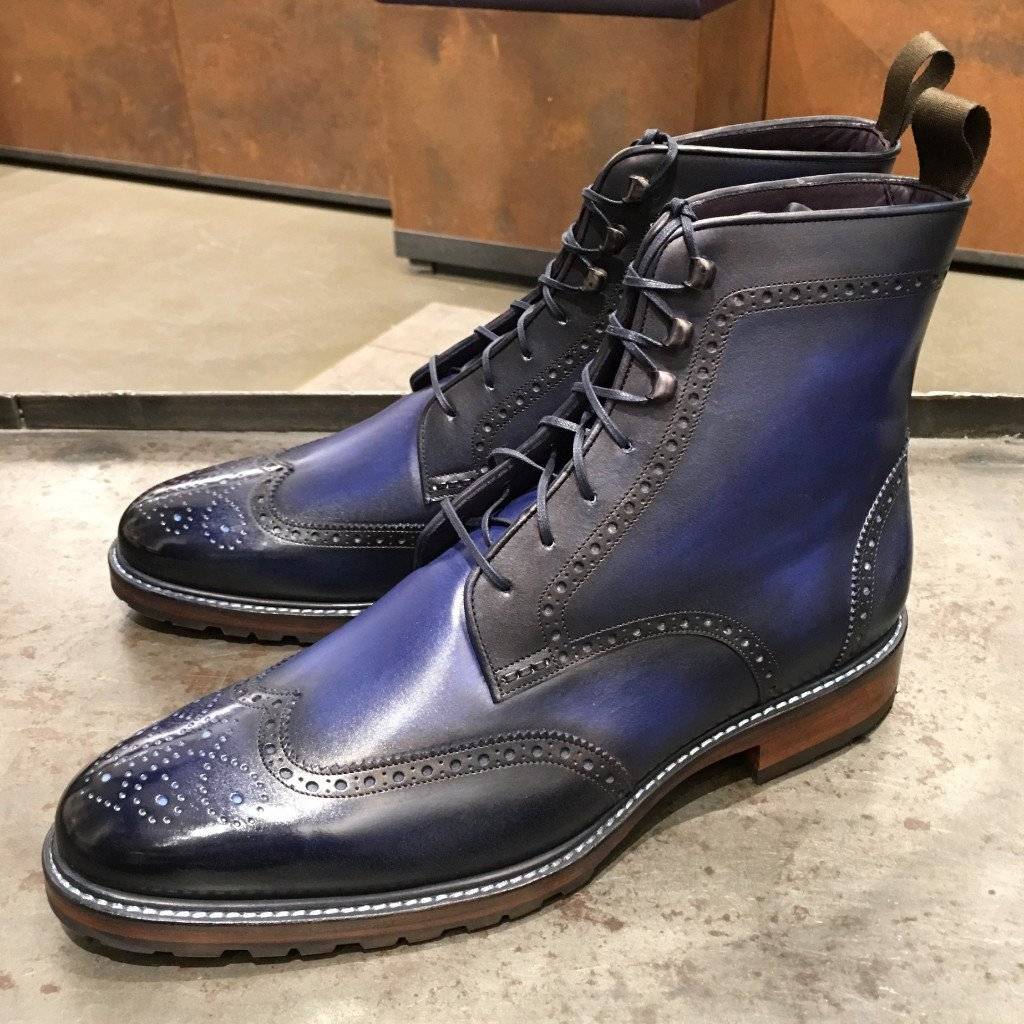 THE EX03 MODEL IS AN EXAMPLE OF A UP DERBY

On this variant, a piece of leather is added to the front to form the "straight end".

This stretch can also be simulated by stitching the leather. 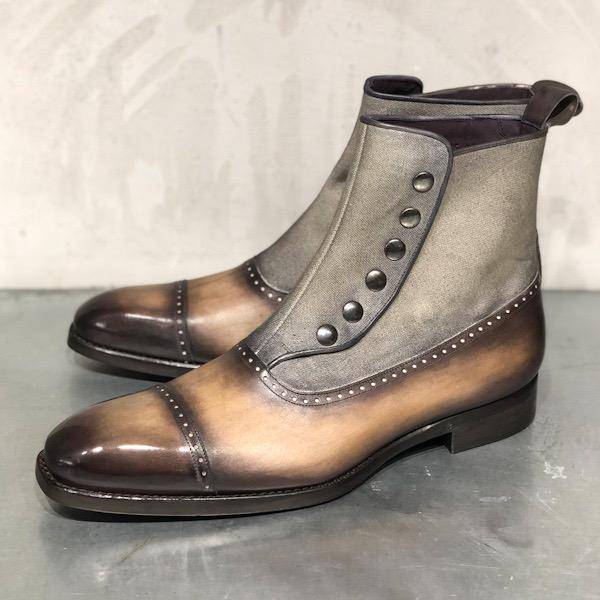 MODEL CR02 IS AN EXAMPLE OF A STRAIGHT TOE BROCHURE

Also called Gaiter, the upper part is generally (the one on which the buttons are located) made of a different material. 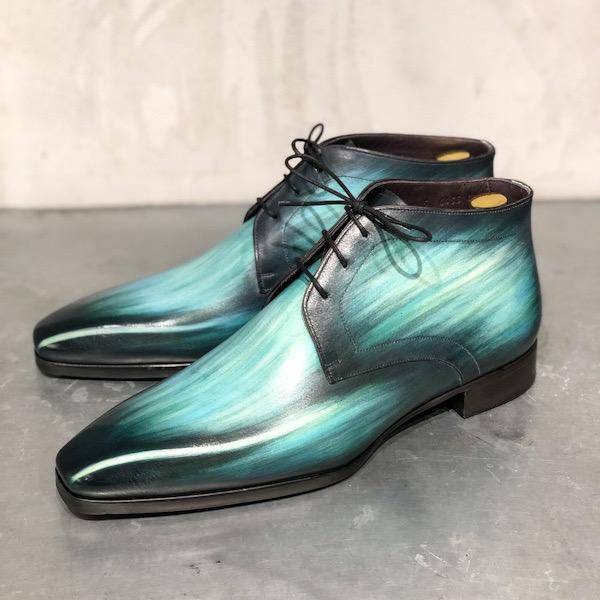 MODEL IT05 IS AN EXAMPLE OF CHUKKA BOOTS

It can be classic or sporty depending on the expression of the patina... 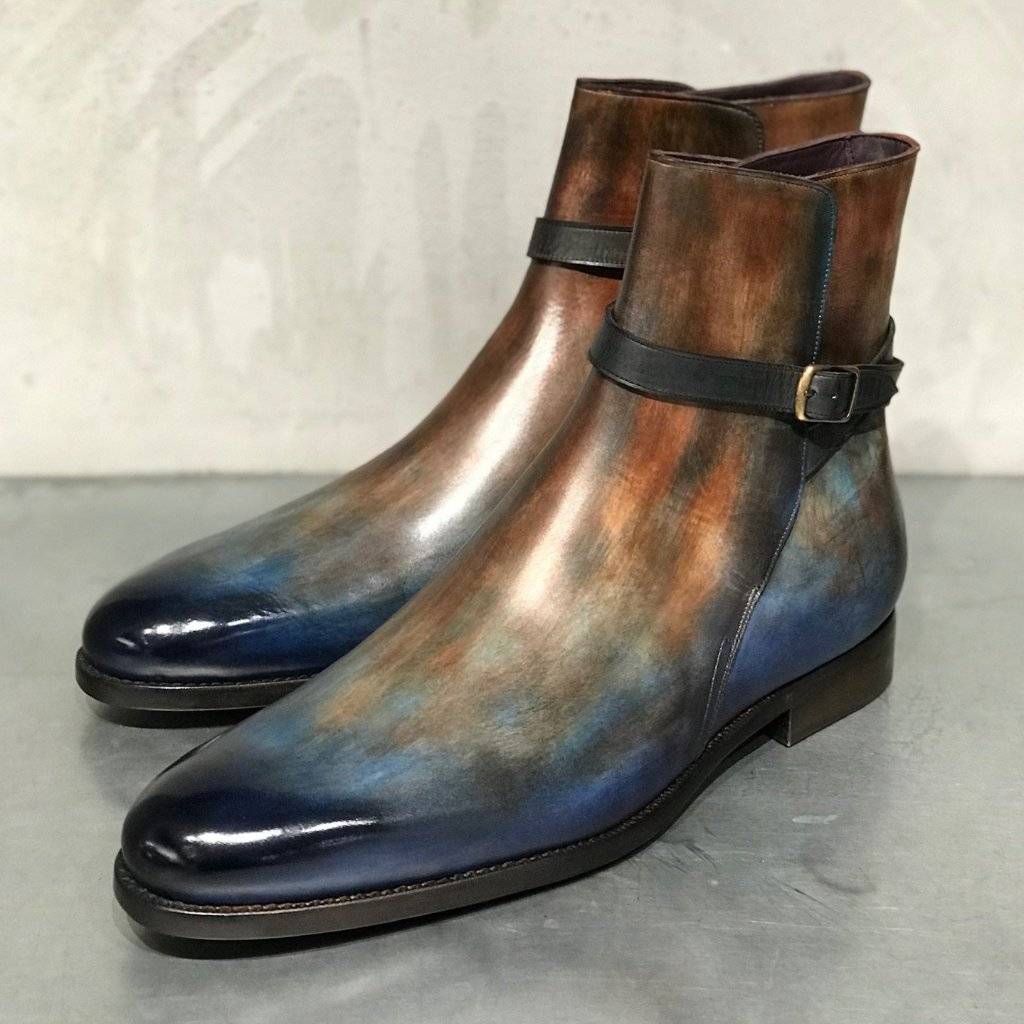 MODEL EN03 IS AN EXAMPLE OF A JODHPUR BOOT

You can recognize a Jodhpur – which was originally designed for riding – by the strap that is used to tighten the shoe at the ankle.